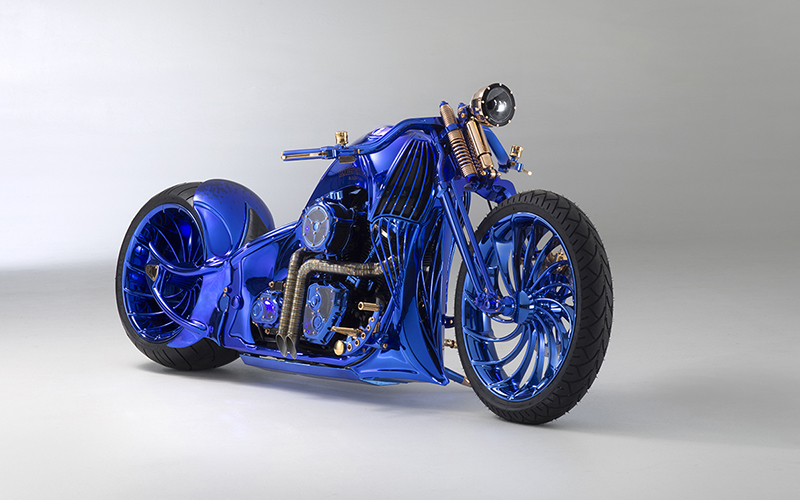 February 25, 2019 - In May 2018, the most expensive customized Harley-Davidson ever was unveiled in Zurich, Switzerland. This was the kick-off marketing campaign for the Blue Edition line from Bucherer Watch & Jewelry manufacturer from Lucerne. They collaborated with a well-known customizer in Maienfeld, Harley-Davidson Bündnerbike.

Bringing together an 8-member team of specialists from both companies, it took a year to design and produce this motorcycle art. Expending more than 2,500 working hours, you can immediately see some of the finest touches: the gold-plated trimming with diamonds, the glass-covered safes on the gas tank displaying one of a kind jewelry. Not to be ignored are the custom parts seen on the bike, such as the rotating camshaft, throttle valves, heat-resistant LED lights and the first motor to light up from the inside.

The paint had to reflect the blue to represent the Bucherer Blue Edition line. To achieve this iridescent blue, they first silver-plated the parts, then coated them six times to get the right blue. Now all they had to do was the wheels.

Bündnerbike was familiar with Metalsport Wheels and had seen one of their latest designs, the Blade. The sizes they needed had never been done before, so revised programming was a must. Once the wheels were manufactured, they were shipped to Bündnerbike where the wheels were then finished in the same iridescent blue.

On Sunday, February 24, 2019, the motorcycle enthusiasts were able to view the bike at the Swiss-Moto Customizing and Tuning Show in Zurich, Switzerland. The coverage on this bike went through the internet like wildfire.

Back to Latest News