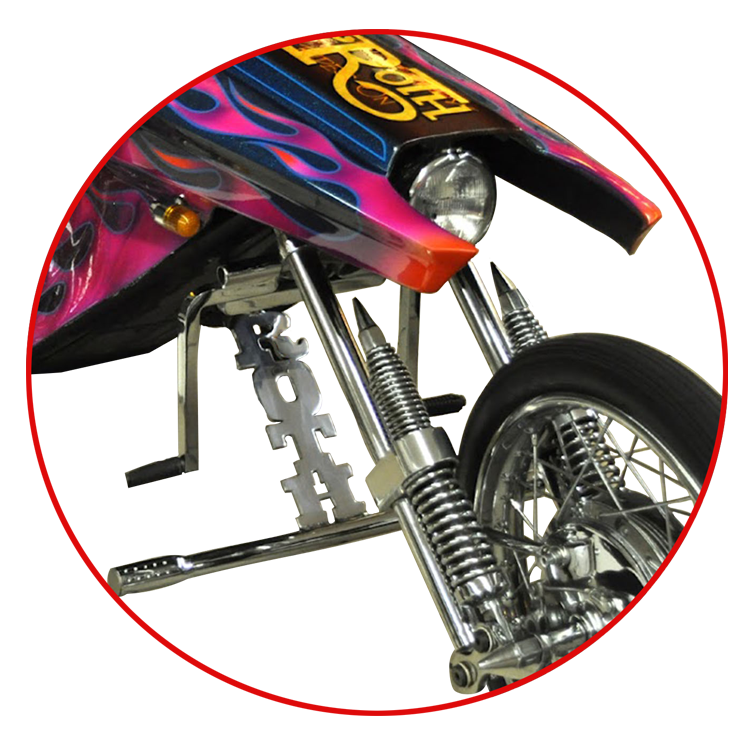 Before the Big Wheel Phenom

Metalsport Wheels is owned by a motorcycle enthusiast. Ron Loynds started riding bikes before Harley-Davidsons were cool to ride. Ron grew up around a machine shop, so he had access to all the tools. Of course, that opened opportunities to make parts and modify parts for his bikes. By the early 70’s, Ron had earned a rep about the quality of parts coming out of his shop.

One day, this tall guy showed up and wanted Ron to help him with a project. It was Big Daddy Roth who wanted him to design and build a better front end for his trike kits. From there, his machine shop was bombarded by the industry’s builders to build parts for motorcycles.

To this day, the machine shop is still cranking out parts for many of the industry’s aftermarket companies and high-end builders.

Ron and his crew of enthusiasts were approached in 2005 to build a bigger wheel than the 23” that was available. After trial and error, the 26” motorcycle wheel was created. Master bike builder, Matt Hotch, put the first 26” wheel on his chopper, and Metalsport Wheels was established.

Having seen the success of the 26-inch front wheel, the guys at Metalsport Wheels decided to push the big wheel envelope by creating the first 30-inch front wheel and approached Vee Rubber to create the motorcycle tire for their new size. “We didn’t really think people would ride a bike with a 30-inch front wheel,” Metalsport’s owner Ron stated. “We just wanted to present the opportunity to talented bike builders in order to push their skills in creating concept bikes.” The difference between the 26 and the 30-inch wheel is that the 26 can go on a standard frame, but the 30 required modification of the frame and neck. Not just being satisfied with concept bikes, Ron and his crew discovered that people wanted to ride bikes with 30’s out front. Matt Hotch, who would never put out a bike that wasn’t rideable and safe, took the time to reengineer the frames and necks with proper rake and trail and designed a very rideable and comfortable 30-inch motorcycle.

Metalsport only sold the wheels to builders that could set up the frame and neck properly. Consequently, there have been no issues with the 30s, 32s or 34s. “We knew the wheels were going on bikes with builders who knew how to set them up properly,” Ron says. “Many of the people who ride these bikes claim that they handle better than a stock bike, mostly that the large tire smoothens out the highway, not so much with U-turns though.”

Many critics said when the 26 and 30-inch wheel came out that it would be a short-lived fad. That was ten years ago. “The 34s, introduced two years ago, are really starting to move, because they have been established to be so rideable,” Ron tells us. “People ask when the next bigger wheel will come out. It will have to be someone else who makes an even bigger wheel and tire, the 34 is the last version of the big wheel from Metalsport. If you are thinking of building a bike with a 30, 32 or 34 inch wheel, make sure you research the people that are going to modify your frame, there are good people out there and some not so good. It will make all the difference in the performance of your bike.”

The folks at Metalsport will be happy to suggest some of the builders that put together a quality frame and neck,
give them a call at 562-776-9594.